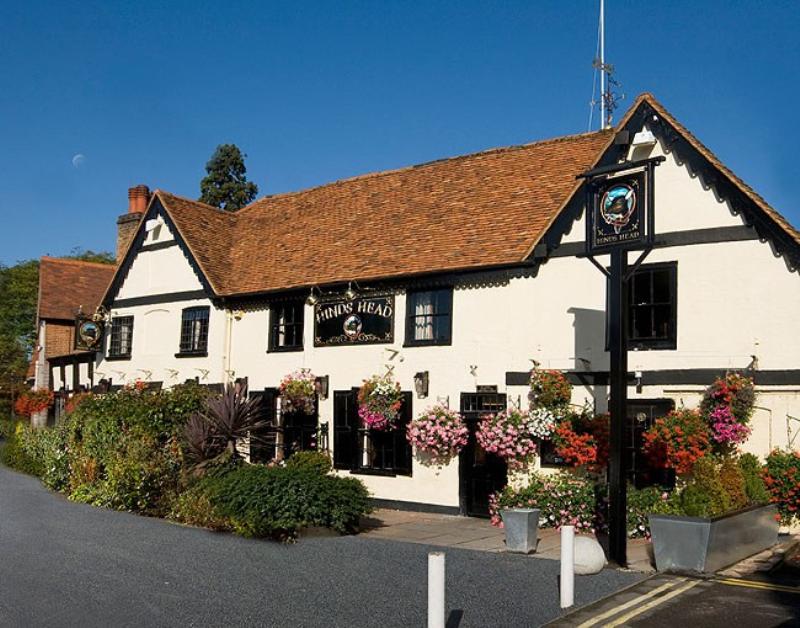 Review on The Hind's Head

Just when you thought Bray was saturated with gold dust eating places, another cracker comes along and this time it's the old village inn, The Hind's Head, a few doors from The Fat Duck. In 2004, Heston Blumenthal bought the pub, took it under his wing, scrapped the accommodation and returned the place to its roots (Berkshire-style, anyway!).

The food at the Hind's Head is a galaxy away from the arcane feats of molecular gastronomy being performed down the road. Instead of weird and wild wizardry, it takes it cue from the pub's history. Heston has even been collaborating with the Tudor Kitchen at Hampton Palace in a bid to re-establish many long-lost British recipes and specialities.

Potted shrimps with watercress salad, rabbit and bacon terrine with cucumber pickles, Lancashire hot pot (with some oysters lurking under the surface), and roast cod with champ and parsley sauce are regulars on the menu; you can also get rump steak with studs of bone marrow and The Duck's legendary 'triple-cooked' chips, and it's also worth taking note of the more rarefied offerings that crop up as daily specials. For dessert, there's sherry trifle, treacle tart and the mysteriously named 'quaking pudding'.

True to its chosen identity as a local pub, the Hind's Head serves lunchtime snacks such as Scotch quail's egg, devils on horseback and Gloucester Old Spot sausages with mash. There are real ales are on tap and piles of newspapers to read, while the wine list brings proceedings right back to the serious business of the day.

Facilities at The Hind's Head

Customer Ratings on The Hind's Head

All of Our Dishes are Cooked to Order, Please be Patient During Busy Periods

We Cannot Guarantee All of Our Dishes are Allergen Free

This Menu is Subject to a Discretionary 12.5% Service Charge

Images of The Hind's Head

Virtual Tour of The Hind's Head

The picturesque and historical village of Bray with its lovely riverside setting is also home to celebrity chef Heston Blumenthal's internationally famous restaurant, The Fat Duck.